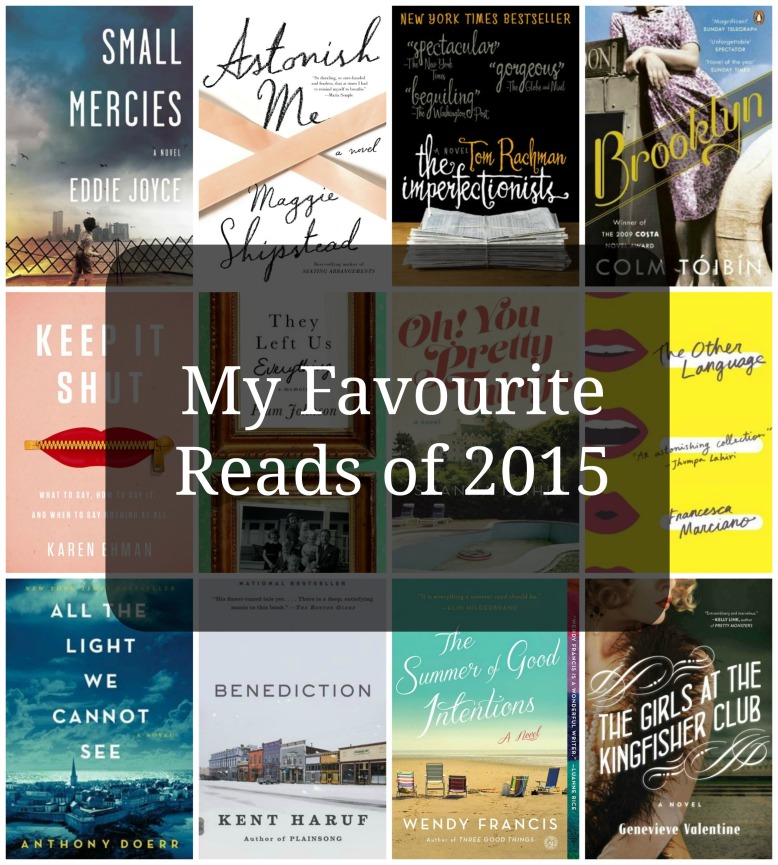 Back in January, I joined the MMD 2015 reading challenge and it gave me the push I needed to step out of my comfort zone. I am a hardcore reader of memoirs, so it was refreshing to try out genres I wouldn’t normally pick up (short story collections, science fiction, and translated books). I also crossed a bunch of books I’ve been meaning to read for years off my list. That was an incredible feeling.

At the beginning of each season, I shared my reading lists here on the blog which helped keep me accountable. I am currently reading my 57th book of the year!

While I read a ton of really good books, I thought I’d share the ones I can’t stop recommending to everyone. Without further adieu, my favourites of 2015…

I picked up Kimberly McCreight’s debut novel on the recommendation of my favourite bookstore employee. I raced through this sublimely crafted thriller in just a few days. The story: Successful lawyer and single mom, Kate receives a shocking phone call from her daughter’s private school in Park Slope, Brooklyn. Amelia, an overachiever and all-around good girl has been suspended for cheating. Kate rushes to the school and upon arrival, learns that Amelia is dead. The police rule Amelia’s death a suicide, but Kate refuses to believe it. When Kate receives an anonymous text saying: Amelia didn’t jump, she sets out to learn the truth by piecing together the final days of her daughter’s life. A perfectly paced and brilliantly written debut from my new favourite author.

All the Light We Cannot See by Anthony Doerr

Doerr won the 2015 Pulitzer Prize for Fiction for his stunning second novel and it was well deserved. I read this beautifully-written historical novel back in February. I am a pretty fast reader, but this one begged me to slow down and savour the exquisitely drawn images of the walled port city of Saint-Malo. Doerr quickly became one of my favourite authors and I’ve made it my mission to read everything he’s written. Back in the spring, I picked up his memoir, Four Seasons in Rome and highly recommend checking it out! His debut novel, About Grace is next on my list.

The Imperfectionists by Tom Rachman

I picked up Rachman’s debut novel thanks to its gorgeous cover and glowing reviews. I just couldn’t turn the pages quick enough; I read it in two days. The story follows a struggling small English-language newspaper in Rome and the private lives of its reporters, editors, and executives. While each chapter reads like a short story that could stand on its own, I appreciated the way in which Rachman seamlessly intertwined each character’s story. A smartly-executed, beautifully written book that you will keep coming back to.

Astonish Me by Maggie Shipstead

I read Shipstead’s Astonish Me in the spring and fell in love with her beautiful writing. The story centres around Joan, a wife and mother trying to forget her past and settle into suburban life. Her past involves a career as a ballerina in Paris and a passionate romance with Soviet dance superstar Arslan Rusakov. When her son turns out to be a ballet prodigy, Joan is thrust back into the world she thought she’d left behind. A well-told, meticulously researched look behind the curtains at the demanding, and sometimes dark world of professional ballet.

They Left Us Everything: A Memoir by Plum Johnson

This memoir came highly recommended by Jim at my neighbourhood bookstore. At first, I was concerned it would be too much of a heavy read for me, but I found myself laughing throughout. While this is a well-told story about family, grief, and letting go, the main character is the house itself. Johnson does an incredible job of bringing the 23-room house to life. As I read, I couldn’t help but view the house as a living, breathing thing. A funny, heartwarming family memoir that’s not to be missed.

Keep it Shut: What to Say, How to Say It, and When to Say Nothing at All by Karen Ehman

This book found me just when I needed it most. In her bestselling book, Ehman explores speech, the power of the tongue, gossip (what it is and what it isn’t), and how to be a better listener. She shares personal anecdotes about how her tongue has gotten her into trouble over the years and draws attention to Bible verses—specifically from the Book of Proverbs—on speech and watching our words. I thoroughly enjoyed this book and with each turn of the page, I felt convicted in ways I never thought possible. I made a ton of notes on each topic in my journal and I return to them often. I’ve been passing this one along to friends all year long. A no-nonsense, relatable, and life-changing read that I keep recommending.

I read Toibin’s bestselling novel for the ‘a book I chose because of the cover’ category in the MMD reading challenge and fell hopelessly in love. It’s the gorgeously-told coming-of-age story of Eilis Lacey, a young woman from the small Irish town of Enniscorthy who lands a job in Brooklyn, New York and leaves her family and everything she has ever known behind. Upon arrival in the unfamiliar city, Eilis is greeted by a nosy landlord and jealous roommates. An absorbing read about longing for home, learning to navigate the unknown, and falling in love.

The Summer of Good Intentions by Wendy Francis

I read this hot summer 2015 release back in August and it’s not your typical beach read. Every summer, the Heringtons gather at their summer house in Cape Cod. And this summer is no different. The Herington girls, their husbands, kids, and divorced mother and father are all eager to leave their personal problems behind and enjoy the sun, sea, and salt air. But what they’re running away from only ends up catching up with them that much sooner. An incredibly well-written, very relatable, poignant, and funny book about the bond between three sisters and the messiness of family relationships.

The Other Language by Francesca Marciano

One of my reading goals for 2015 was to give short stories a chance. I picked this collection because of all the praise it received from fellow authors and I was not disappointed. Reading this collection was like taking a trip around the world minus the busy airports, long wait times, and overstuffed luggage. In no particular order, my favourite stories are “Quantum Theory”, “Chanel”, “Presence of Men”, and “Roman Romance”. I’m so happy I took the leap. If you’re thinking about giving short stories a try, Marciano’s collection would be a good jumping off point.

The Girls at the Kingfisher Club by Genevieve Valentine

I picked this novel for the ‘book I’ve been meaning to read’ category of the reading challenge. I finally read it over the summer after so many people raved about it. I absolutely loved Valentine’s retelling of the fairytale, The Twelve Dancing Princesses. Set in Prohibition-era New York, it’s the tale of a father who desperately wants a male heir, but his wife keeps having girls—12 in all. He keeps them hidden away from the world in the upper rooms of his Manhattan townhouse. But as they grow older, the house can’t contain them any longer. Under the leadership of the eldest sister Jo, the girls sneak out late at night to go dancing at Manhattan speakeasies. I read this one in less than a week.

Joyce’s debut was my pick for the ‘a book published this year’ category of the MMD Reading Challenge. The story takes place over a week, ten years after the 9/11 attacks. It zeroes in on an Italian-Irish American family living on Staten Island and how each family member struggles to come to grips with the loss of the youngest son, Bobby—a firefighter. A moving portrait of grief, holding on and letting go, and the complexities of familial relationships. I am so glad I read this beautiful book and I shared my love on Twitter and Joyce made my week when he replied to my tweet! I can’t wait to see what he comes with next.

I picked up Donoghue’s bestselling novel when it first came out in 2010, but I only made it halfway through back then. The adaptation premiered at the Toronto International Film Festival in September and won the highly coveted 2015 Grolsch People’s Choice Award. I vowed to pick up the book again before going to see the movie. This time around the unforgettable story of five-year-old Jack and his Ma and every minute they spend locked up in a backyard shed stirred up so many emotions. I laughed, I felt sad, I felt angry, I felt hopeful. Donoghue’s decision to tell the story through Jack’s eyes worked brilliantly. While she grapples with tough issues like kidnapping and rape, at its heart, this is a gripping novel about a mother’s resourcefulness and fierce love for her son, the power of imagination, and surviving against all odds. One of the best books I’ve read in years.

Jess Dunne is third generation Hollywood trying to make her mark in Tinseltown while juggling her job as a personal assistant, her estranged mother who shows up uninvited on her doorstep, and her actress best friend. While this one made me laugh a lot, it has its touching moments. A glaring look at life in Tinseltown—those on the inside and those on the outside doing everything they can to get in. I appreciated all the spot-on Hollywood references. Friendly warning: this one contains a smattering of colourful language.

Benediction is the first novel I’ve read by the late author. Haruf weaves an incredibly moving story about death, life, compassion, family, neighbours, and friendship in a small town. Set out on the high plains of Holt, Colorado the story centres on Dad Lewis who is recently diagnosed with terminal cancer. His wife, Mary and daughter Lorraine lovingly care for him at home. The gorgeous setting and stunning writing makes this read a great one to curl up with. I’ve added his debut novel, Plain Song to my must-read list.

The Secret Life of Violet Grant by Beatriz Williams

I read a ton of historical fiction this year and this novel was one of my favourites. Williams skillfully whisks us between 1964 Manhattan and 1914 Berlin. When twenty-something Vivian Schuyler receives a battered suitcase in the mail, its contents shuttle her back into her family’s past, and the crime of passion of an aunt she never knew. Violet Schuyler Grant endures her marriage to her cheating husband, the brilliant and older scientist Dr. Walter Grant. But when Dr. Grant’s former student, Lionel Grant enters the picture, he challenges her to leave her husband. As Vivian delves deeper into her aunt’s past and unravels the mystery of her ultimate fate, Violet’s incredible story teaches Vivian to fight for her future and what she desires most. This stunningly executed novel is filled with secrets, ambition, romance, intrigue, and an incredibly surprising ending.

Notable reads: The Knockoff, My Salinger Year, The Painted Girls, It’s What I Do: A Photographer’s Life of Love and War, Me Before You, Delicious!, Queen Sugar. 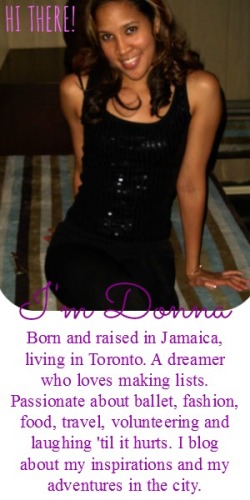